Is Compaction More of Just a Pest OR Does it Have Lingering Ramifications?

That question (in the title) was posed to me from a younger grower while I was with my co-worker up in NW Minnesota during the week of September 9th at a field event put on by University of Minnesota Extension Service to show folks and go over with growers speaking at the study near Barrett, MN focused around Soil Health and Tillage.

I have been away from the computer for a few days with field events, traveling by pickup to and from and a bicycling vacation in the mountains of Southern Wyoming which was for me was incredible fun as we traveled on an 100+ year old abandoned railway carved in the mountains to transport, coal and lumber in the 1930’s up until the 1950’s. A portion of the trail has been improved for horses, people to walk and bicycles to ride on. We also rode on a portion that will be developed in the future riding under fallen trees, over logs, over rocks, around shrubs and through tall grasses – oh a great adventure on Adventure bicycles/Mountain bikes. So let us dig into this posed question….

This year, 2020, was the second year we have conducted some specific soil compaction measurements and analysis in numerous field from east central Nebraska to the Front Range of Colorado and fields in between for the purpose to relate to our readers and customers differences in soil density under strip till, No-Till and Conventional Till. We measured trafficked rows, non-trafficked rows and what one would find directly under where the seed was placed this spring. As a tillage company why would we see a reason to do this? For those of you who know Mike Petersen the answer is obvious but to others, well here are six thoughts to think upon.

I am not going to blow smoke up the seams of your britches – compaction has caused many detrimental effects to the growth of crop root systems whether we farm light, medium or heavy textured soils [sandy to loam or silt loams to silty clays. Walk with me to consider each one by one I have selected six items:

1) Water movement, in and down a soil below the 20 inch (50cm) depth will be slowed dramatically with soil compaction.
Compacted soils have been squeezed, squished, mauled, smeared and run over so many times with full width tillage passes, heavy harvest traffic, big disks, twisted shanks on chisel frames, sweep plows, moldboard plows, and even big planters when soils are too moist – a shame our soils even respond whatsoever to additions of fertility. 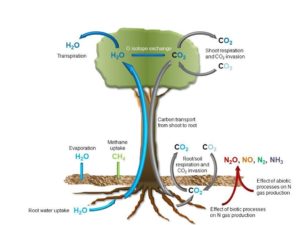 2) Gaseous exchange in and out of the soil. This includes Oxygen, carbon dioxide, carbon monoxide, sulfur dioxide, nitrous oxide, argon, and many more. These gases are part of the biological cycles of the roots respiring and transpiring in the soil as well as the microbial life living, breathing and dying. Macro and microorthopods living in the soil and the breakdown of carbonaceous materials from previous crops chemically and biochemically. Some of these gases are absorbed by roots as well as the fungi, earthworms and plant roots. In a chemical combination with water we can get sulfuric acids, carbonic acid, malic acid, humic acids, fulvic acid, weak nitric acids that all aid in the breakdown of carbon materials and maintaining the pH balance for soil life. The informative diagram to the right offers an idea how all this occurs with gases in soils, through plant life and effect on the carbon cycle. Where I am going with this thought process is that when soils are far too dense the respiration and invasion of CO2 is dramatically impacted; slowing root growth, uptake of water and other nutrients, even evaporation is slowed and other gases that should move in and out of the soil are affected. If a number of the gases are slowed the soil chemistry balance goes to use a word – kerflooey!

3) Biologic activity; this is an entire text book if I was to delve into the subject. However, soil biology – lifecycles of microbes, the activity of fungi, insects living in the soil, earthworms living, populating and cycling materials, nematodes, colembra, spiders, crickets, etc they all can and are negatively impacted with soil compacted layers. When pore space is diminished and squeezed down to near nothing – O2 is lost and the aerobic bacteria which are the most important species in the upper 20 inches of the soil to convert carbon based materials and mineral fertilizers to be available to the plant root. Also with reduced pore space we see water availability and the microbial life diminish greatly. The soil holds tightly onto the water molecules and the roots matrix potential [MP] or sucking power to simplify the MP term, just cannot pull the water into the root. Result — drought-like stress.

4) Root development, both vertical and lateral growth in soils that are compacted is negatively effected. When roots of all crops we raise for food, fiber or forage are new from the seed they have very small amounts of energy and force to extend root tips. When they encounter resistive forces much higher then what the root tip can push down or forward and these roots struggle to keep going – growth is retarded, too much energy is used and the plant goes into stress and slows down growth, uptake of water and nutrients is damaged and the plant in a fashion goes backwards. It has been said that with every 1/2 inch of lateral growth as seen in Figure 2 yield drop off can be 1

5) Accumulation or Loses of of organic carbon. Compacted soils, how does that impose problems on soil organic carbon gains or loss you ask?
The carbon based materials remaining on the soil surface and a layer of compaction lies below let us say starting at 4 inches extending to 7 inches deep. Soils above the compacted layer will rise in temperature faster and carbon based fibers will oxidize faster than a soil that breathes better and allows water to move downward. Microbes will eat the near surface material quicker because they have difficulty in repopulation and moving down with water that follows cracks, ped faces, worm tunnels and contiguous pores. When they eat all what is in the near surface and it oxidizes away then again the young plants can be in trouble.

6) Heat exchange
I just started on the idea of how soils will heat up in the early days of growth, especially in conventional full width tillage systems. I will try to explain it; structurally, a higher organic matter content in the soil surface area increases soil porosity which also decreases soil thermal conductivity and which thermal diffusivity, which is a is key parameter that describes the rate at which soil temperature changes given a temperature gradient (one dimension of Fourier’s Law in Physics). This thermal diffusivity value of D is determined by soil composition (minerals, air, water/ice, organic matter) and soil structure. When soil pores are filled with air or nearly dry, the diffusivity is higher. As a result, soil organic matter (SOM) will act as an insulator and the presence of SOM cools the soil during spring and summer, while its warming effect during winter is less important due to the insulating snow cover. Opposite – low organic matter soils and compacted will respond differently and any soil organic matter can and will be burned up. There have been a good deal of studies in the permafrost region of the Northern Latitudes that verify this but in frozen soils.
In all of the years of over tilling soils, rice paddies of SE Asia or China, the terraces of the Danube River in Europe, the soil biological life has been overwhelmed to the point some species have had their population decimated that their one time effectiveness and importance is nearly obliterated. Structural soil units of the soil complex responds as if it is exhausted now portraying soil erosion rates > 10T/acre [22.4T/ha]. We have observed severely eroded upper positioned soils on the landscape more conducive to erosion and continue to erode when compaction is involved. This is part of the reasoning behind our work to study, maintain a current view of tillage systems and what tillage is doing and crop responses. We want to know what our Strip Till implement does, how soils respond and how crops respond even more, as well water movement, organic matter use and storage on the surface and down into the soil profile. The most biological active zone of the soil is the the surface 4 to 6 inches, when that erodes away – we are in for a bumpy ride.

I personally have been digging soil pits to observe roots but also considered soil profile building or soil deterioration for over 39 years which a soils man like me really takes this serious. Since 1984 I have noted and documented over 1700 soil pits to better understand tillage or the lack of. What we do when the 1tRIPr goes out the big doors at Lexington, Nebraska manufacturing plant; is to provide our customer an assurance that we have placed our best knowledge and skills building this implement with organized science in and behind the toolbar, down to the points on the shanks, yes the wavy coulters close behind that shank, the baskets, how fast or slow it is pulled through the soils. That is why we are doing research, poking in and around fields. I do realize that I want to know more, for I for sure have not arrived. We are welding and manufacturing a machine the builds the best initial rootzone, we see the 1tRIPr that conditions the soil for plant-root development all season long and offer a positive and accurate placement of grower chosen fertility. How our tool tills to help maintain vertical soil structural units is very important to water movement, we aim to reduce the potential for soil erosivity, we attempt to work during the periods of the soil biological activity slowed so bio-damage is minimized and tilled at the right soil moisture conditions to do the proper job under and into the zones of compaction.

I hope this makes sense that Strip Till is making a difference for the grower’s checking account and helping the soils to function properly. I welcome questions shot across the bow of what I write. Glad to offer help if I can and show or inform you what we are learning.