New information regarding placement of Phosphorus with Strip Tillage

I know I have brought before you all information stating that Phosphorus (P) placement can be maximized with Strip Till. This time I am going to touch upon that argument again because some more information has come to light with researchers in the U.K. and Germany just within the last couple of years, as well I want to share with some of our work at Orthman in root improvements with placement.

As a soil scientist working for USDA-NRCS before coming into the private world, I had 25 years of looking at over 420 root systems via post-harvest root digs in both rainfed and irrigated crops; now near 11 more years with Orthman Manufacturing I have more than doubled that number. That said, I have not had the privilege to see roots of corn, soybeans, dry edibles, sunflowers, small grains, canola and other crops with the X-ray computer tomography technologies. All my efforts have been more hands-on and crop destructive by digging a 3 dimensional pits and teasing out the living roots then sketch a diagram of said roots. I say this to allow you to compare my information, data compared to what the researchers I typed about in the first paragraph.

The researchers; Morris et al. from the United Kingdom, University of Nottingham in Current Biology wrote that there are several variations of why roots develop and form a specific architecture or shape early in its growth to maturity due to environmental signals, what are called biotic and abiotic.

Gravity is the first; roots have the ability to sense direction of gravity very early on. Within 8 hrs after the seed planted imbibes water which is 10-12 hrs prior to root emergence. This is called positive gravitropism.

Light – sunlight that is. Plant roots are negatively phototropic, they grow away from light.

Each plant species have differing angles of roots depending upon different classes of roots; primary, seminal, adventitious and so on.

Soil structure: blocky vs prismatic vs granular vs massive

Soil pores; continuous and non-continuous from the soil surface

In this segment of the Precision Tillage agronomic blog I want to expand upon the fifth bullet point, stress or address the advantage from phosphate nutrients placed or absent. I will attempt to go through the other bullet points in future blogs.
We at Orthman have said and have observed in numerous fields’ better root structure, root numbers, size of roots, even measured root length density when P products are positively and precision placed. We have stated clearly that there is a “sweet spot” where to place P in the soil with strip till (the Orthman 1tRIPr tool predominantly) and the research papers I have read bear that to be true. We have stated it is between 6 and 8 inches deep. We have ascertained from reading and our own research that placement depth is when the plants root system is in full force extracting nutrients from 6 to 10 inches depth. In a fashion folks we have not been telling you all a far-fetched story of fairy dust and the planet Mars having water to drink or irrigate crops with in the year 2155. Soybean research carried out by scientists [F.D. Hansel et al., 2017] in southern Brazil noted that soybeans using triple superphosphate placed with a strip till method compared to No-Till broadcast and No-Till banded. These data depict that root length density (RLD) at the 6 to 8 inch zone below the surface in the deep banded strip till P was 58% greater than the No-Till broadcast P approach and 46% improved than No-Till banded P at planting time. Their yield results had little penalty under the strip till compared to No-Till. At depths of 8 to 12 inches, I saw from their graphs at one site 72% more RLD in strip till compared to No-Till P being broadcast on the surface and at the second site, 38-62% more RLD. All of this and more is in the paper published in Agronomy Journal referenced at the end of this agronomic blog.

I am including some diagrams to illustrate the point of increased RLD in a specific zone due to placed phosphorus fertility as the scientists from Brazil share from soybeans and of Orthman’s work [soybeans, cotton & corn] and research in barley. 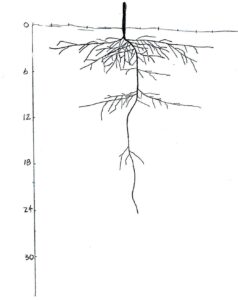 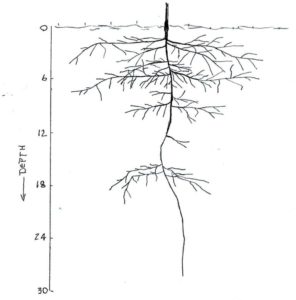 From the images to your left you can observe that the surface banded P&K cotton plants show shallow roots in the first set of laterals of the cotton plant in the conventionally tilled portion of the field, then in the remainder of the field the grower strip tilled with an Orthman 1tRIPr and placed a portion of his P&K nutrients with the strip till pass at 6 inches depth. The plants exerted effort to send laterals at 6-7 in, then 9 to 10 inches and a set of laterals at 18 inches deep.

The total depth of the strip tilled cotton was 29 inches deep and the volume of roots was near 45-50% more in total volume of the soil explored compared to the conventionally tilled cotton and surface banded P&K at planting time. 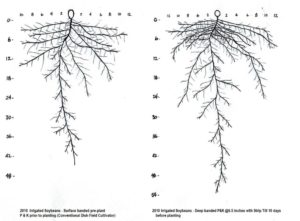 Irrigated soybeans – Orthman Research Farm 2010 Conv Till vs Strip Till with P&K placement (Near Lexington, NE)
In these images to your left and below, soybeans that were strip tilled and conventionally disk-spring field cultivator depict differences from our root excavations. All delineations are in inches both depth and laterally.
The soybeans that were strip tilled and P&K placed at 6 1/2 inches deep show more total root numbers and soil volume explored in the first 24 inches as well as in final depth at 53 inches ST vs 44-45 inches deep under the conventionally tilled scenario.
Yield in bushels per acre (bpa). The conventionally tilled soybeans were 62bpa and the soybeans under the strip till yielded 73bpa.

The image down and to your left depicts barley (Hordeum vulgare). Deep banding of varying nutrient loads are shown between the two dark lines. The authors of this work in their illustrations depict a larger mass when plants are deep banded with phosphorus and nitrate nitrogen. This was not strip till research, but work from Hodge shown below, but it depicts what does happen with banded nutrients in a small grain.
Barley root systems enhanced by deep banding various nutrients at the 5 to 7 inch depth with the use of a coulter injection tool.

Below are two root systems from irrigated corn research from eastern Colorado at the Irrigation Research Foundation Research Centre near Yuma, CO, 2009. Research funded by Colorado Corn Growers Association and Monsanto.
The root system (see below) of corn which was strip tilled with the Orthman 1tRIPr and liquid N-P-K was applied compared to plots of No-Till corn, same variety and relative maturity day length on the right. The precision placed nutrient load was the same equivalent of what was used via the 1tRIPr, was band sprayed (15inches wide) one day after the pass of the planter over the row area. Both areas of the field were planted at 32K plants per acre.
The root system is deeper is 28% deeper, the root mass is 34% more in volume of soil-to-root density with the strip tilled corn compared to the Direct Seeded corn. The roots in the No Till corn have a wider lateral spread away from the trunk of the plant in the upper 5-6 inches of the soil profile. In a drought scenario the NoTill corn could suffer. What we did notice that the No Till called for 2.5 inches more irrigation to be applied under overhead sprinkler irrigation.
The end result was fewer bushels per acre with the No Till or Direct Seed method at harvest time. Yields; NT – 209 bpa vs ST – 216 bpa. Water saved was 2.5-3 inches of applied water with the Strip Till and a 7 bpa improved yield.

To Summarize:
From the research efforts of others across the pond and here what we have observed at Orthman; we can offer you these points….
Precision placed P&K has contributed to better P & K uptake
Positive placed nutrients increases biomass of the roots and above ground plants
The illustrations of soybeans, cotton, barley and corn offer strong evidence of more roots which in-turn can obtain more nutrients and water
There can be yield improvements, depending upon climatic concerns; rain, drought, hail and winds. Our trials in cotton, soybeans and corn all provided some positive results in final grain and lint yield.
Mid-season 50 old corn plants (irr.) on left, Strip Till w/Deep placed P&K at 6in. a proliferation of roots in orange circled areas.
On right, No-Till surface applied P&K which are mostly immobile in calcareous soils such as these in Eastern Colorado, orange
outlined area shows where majority of roots are

There is still much more research that is being carried out regarding placement, the right products, the correct timing of application of nutrients beyond nitrogen, phosphorus and potassium the major three of the macro-elements.
Referenced Material I used and read for this blog article:
Morris, E.C., 2017, Shaping 3D root system architecture. Current Biology 27, pg 919-930
McNear, et al., 2013, The rhizosphere – Roots, soil and everything in between. Soil, Agriculture and Agricultural Biotechnical Engineering, 4(3) 1-
Hodge, A., 2004, The plastic plant: Root responses to heterogeneous supplies of nutrients., New Phytologist 162:9-24
Meurier, F., et al., 2020. Hydraulic conductivity of soil grown lupine and maize unbranched roots and maize root-shoot junctions. Journal of Plant Physiology In Press
Peng, Y. et al., 2012, Temporal and spatial profiling of root growth revealed novel response of maize roots under various nitrogen supplies in the field. PLoS ONE 7(5) e37726